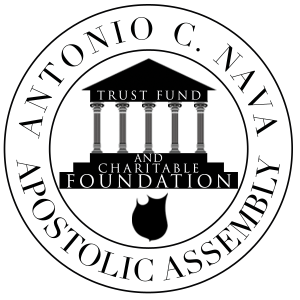 Antonio Castaneda Nava Charitable Foundation is the trust fund serving the members of the Apostolic Assembly in the continental United States and abroad. The Trust Fund is sustained by donations, which result in the accumulation of financial assets or investment vehicles that mature and earn interest yielding a profit. Upon need and eligibility, members of the Apostolic Assembly will have the privilege of becoming recipients of the determined aide.

The A.C. Nava Foundation has the ability to serve the members of the Apostolic Assembly in the following ways:

– Providing emergency financial assistance to or for the benefit of the surviving immediate family of a deceased congregant who was an active participant in the programs, worship or outreach services of the church.

– Providing supplemental retirement and pension benefits for those who have served as Presidents and pastors of the Apostolic Assembly.

– Awarding scholarships to deserving students based on demonstrated financial need and potential academic achievement. Such scholarships are awarded on a non-discriminatory basis, without regard to a student’s race, gender, physical handicap, or nationality.

– Providing emergency relief and assistance in the form of food, shelter, medical supplies, services, and clothing for the victims of disasters in or near any domestic or foreign location of any branch or mission of the church. Disasters include but are not limited to earthquakes, flood or fire, man made disaster such as civil unrest, terrorism or war.

Antonio Castañeda Nava was born on October 4, 1892, to Simon and Roberta Nava in Nazas, Durango, Mexico. Antonio Nava sought to enlist in the insurrectionary forces at the start of the 1910 Mexican Revolution. His father’s firm opposition led Nava to venture northward instead, where he secured employment in the cotton fields of California’s Imperial Valley. Fellow farm worker Marcial de la Cruz…