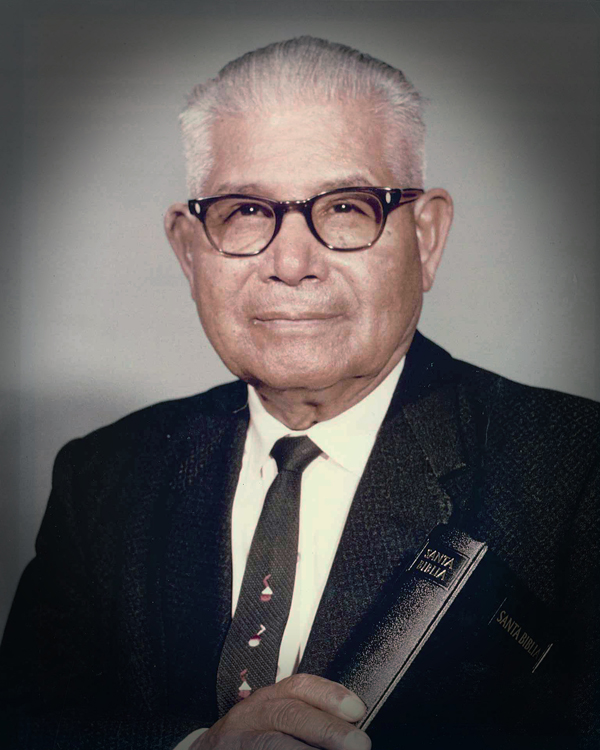 Antonio Castañeda Nava was born on October 4, 1892, to Simon and Roberta Nava in Nazas, Durango, Mexico. Antonio Nava sought to enlist in the insurrectionary forces at the start of the 1910 Mexican Revolution. His father’s firm opposition led Nava to venture northward instead, where he secured employment in the cotton fields of California’s Imperial Valley. Fellow farm worker Marcial de la Cruz was instrumental in Nava’s conversion to Pentecostalism in 1916.

Antonio Nava began his ministry in 1918, evangelizing and pastoring in Yuma, Arizona, and the border towns of Calexico, California, and Mexicali, Baja California. Along with colleagues Marcial de la Cruz, Francisco Llorente, Felipe Rivas, Jose Ortega, and others, Nava shepherded the growth and consolidation of the Apostolic movement in the Southwestern United States, Mexico, and Central and South America.

Today, with over 650 churches in 40 states, missionary affiliates in 18 countries, and allied denominations in 5 countries, including the sister Iglesia Apostolica in Mexico, the Apostolic Assembly represents a flagship denomination within the broader Latino and Latin American Protestant movement. The Latino Apostolic community of North and Central America is estimated at well over half a million adherents and sympathizers.

The Apostolic movement traces its roots to the historic 1906-1909 Azusa Street Pentecostal Revival in Los Angeles, California. the cradle of modern worldwide Pentecostalism. Nava and other pioneers gathered the embers of the Azusa revival and transformed them into a full-blown religious movement notable for its cultural and ecclesial autonomy. After returning to Mexico in 1928, Nava was summoned back to the United States to assume the helm of the fledgling movement upon the sudden demise of Llorente. In 1930, Nava severed loose ties with the Indianapolis-based Pentecostal Assemblies of the World, and incorporated the former Iglesia de la Fé Apostolica Pentecostes as the Apostolic Assembly of California. From 1933 to 1944, Nava and his Mexican counterpart, Felipe Rivas, engineered the exchange of territorial jurisdictions and the formalization of ecclesial ties between the Apostolic Assembly and the Iglesia Apostolica in Mexico. In 1932, Nava published Himnos de Consolacion, modern Protestantism’s first original Spanish-language hymnal, a compilation of indigenous hymnody composed by Latino authors such as Marcial de la Cruz and Antonio Nava himself.

Nava’s legacy was underscored by Presiding Bishop Rodríguez, who gratefully characterized Nava as “a very special and capable instrument that God used to introduce the Apostolic gospel to the entire Hispanic community. “With Christ’s coming always near, the death of our patriarch inspires us to heightened watchfulness,” he added.

The assertion and practice of cultural and religious autonomy has invited the attention of scholars. Stanford’s Bustos further observed that “leaders like Nava are important because they reveal how entwined religion, culture, politics, economics, and labor are, particularly in the history of the American west. “It is impossible to gain a comprehensive understanding of California history, Latino history, or American religion without taking into account the dramatic origins, growth, and development of Latino Pentecostalism,” he added. Duke University American religious historian Daniel Ramirez further credited Nava with rescuing a floundering religious movement from ambiguous assimilation and persistent political and religious persecution. “Nava then led the movement, through sheer force of will, vision, and exemplary sacrifice, through several decades of maturation,” he observed. “What began as a peripheral movement among borderland farm-workers, now stands poised in adulthood to enter the new century as an increasingly multicultural denomination that encompasses first-generation immigrants as well as their English-dominant grandchildren and many non-Latinos,” he continued. The Apostolic Assembly affirms the Oneness doctrine of belief in one God manifested as Father in the Creation, Son in the redemption, and the Holy Spirit in His outpouring. In addition, it believes in repentance from sins, baptism by immersion in the name of Jesus Christ, and the receiving of the Holy Spirit with the evidence of speaking in tongues. In 1990 the denomination moved its longtime East Los Angeles headquarters to Rancho Cucamonga, CA a historic community in the Southern California foothills and site of an early Apostolic congregation.

Nava married Dolores Ochoa in 1933, and fathered 8 children. Nava pastored an East Los Angeles congregation for several decades, and served as Presiding Bishop of the Apostolic Assembly until 1950, when he was succeeded by Benjamin Cantú of Texas’ Rio Grande Valley. Nava returned to presidential office in 1963, and relinquished the leadership in 1966 to Efrain Valverde of Salinas, CA. Thereafter, he served in an advisory capacity to the denomination as an honorary bishop. After the death of this wife in 1982, Nava settled in the Apostolic retirement home in National City, CA, and eventually took up residence with his daughter Loida in Union City, CA. In 1992, the Apostolic Assembly celebrated the centenary of Nava’s birth. The San Diego event was marked by several civic and legislative tributes in Nava’s honor, including recognition from U.S. President George Bush and proclamations authored by Los Angeles Mayor Tom Bradley, Congressman Pete Stark, the California State Senate and Assembly, Alameda County, and Union City. In 1994, the Apostolic Assembly established the Antonio C. Nava Charitable Trust, as the church’s charitable agency for the support of retired ministers, widows and orphans, educational scholarships and disaster relief.